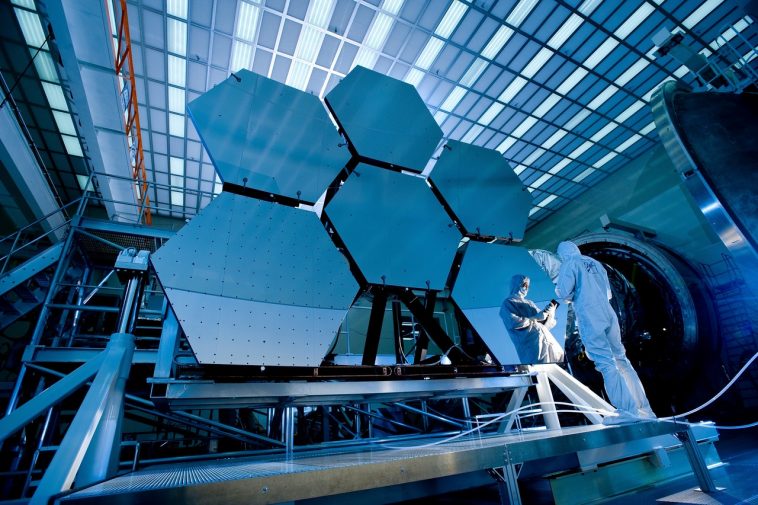 The telescope measures over 21 meters in length and 15 meters in diameter. Weighing approximately 5,443kg, it is bigger than a large school bus and about as heavy as one too. It will be launched on an Ariane 5 rocket from French Guiana to an orbit around L2.

This new telescope will have 6.5 times more collecting area than its predecessor, and it will be able to see deeper into space because of advances in our knowledge of how stars work and how their light travels through space. It will have a very wide field of view, which means it can see more sky at once. The combination should produce images 10 times sharper than those from Hubble today.

The JWST will be our most powerful tool for studying astronomy and cosmology, but it’s also incredibly unique in terms of its design. When launched, JWST will be taken to a distance of 1 million miles from Earth before having a folding mirror unfold and another mirror swivel into place.

Just like any other telescope, JWST will let scientists peer into regions of space they’ve never before been able to explore. The difference with JWST is that it will be able to look at them in detail. If you could imagine a powerful magnifying glass which turns every distant star into a sun, then you’ll have an idea of what JWST will be capable of.

The JWST will be used by professional astronomers, but also scientists and regular people interested in looking at all kinds of phenomena. As NASA noted, the JWST will offer unprecedented access to space, opening a window into our universe that no one has ever seen before. This means that you don’t have to be a member of an institution with millions of dollars to get involved. Anyone can apply for time on the telescope!

Reason 6 – Amazing facts about the telescope

The telescope will be able to see planets around other stars in a manner that can detect atmospheric gases. Because of that, we will be able to search for signs of life on Earth-like planets outside our solar system. After it launches, it will orbit 1 million miles from Earth and 100 times closer than previous space telescopes. It’s pretty awesome.

The technology needed to build a huge, highly sensitive telescope with a 21-foot-diameter mirror that can operate in space 1 million miles from Earth did not exist until recently. New advances in computer chips and electronics as well as lighter, stronger materials like carbon fiber have enabled NASA engineers to make all of their science goals possible.

Reason 8 – More discoveries of our universe are made possible with this telescope.

This telescope will look further back in time and further into space than any other previous telescope. Not only will it give us a glimpse of what our universe looked like billions of years ago, but it will be able to see past intervening dust and gas that obscure distant objects from earth-based telescopes.

Reason 9 – What makes it difficult

Launching into space. Launching into deep space (the type of space we’ll be talking about for JWST) is much more challenging than launching a rocket to low-Earth orbit (LEO).

You see, I can give you nine really good reasons why it’s awesome. But, in all honesty, who doesn’t want to look into space? Who doesn’t want to help humanity know more about our home galaxy and how we got here? My guess is that most people wouldn’t mind looking into space every once in a while. And that makes me happy knowing that I am helping humans find something out about our world. Well, space.